This article is not meant to confuse anyone, but rather bring perspective to previously acquired approach, possibly. Probably not. Try it out in a gather if you'd like.

I'm heartbroken over and over by people who stand outside comchair and keep yelling "I WANNA COMM". That's what inspired me to write this brief guideline for all those who crave glory and honor as a commander. This guide takes you to the comchair(1) by mousehand, outlines an ideal base(2) for your team and gives advice on how to act upon two possible outcomes; victory(3) or loss(4).

It's ok if you haven't played NS before or if you are still in the process of understanding the basic flow of the game. Learning from the chair has many benefits.You're guaranteed to get top score in every game for little effort and you don't die that easily. Command console can be thought as a marine Onos; it has lots of hp, comes with an easy-to-use interface and is very effective.. if a little less mobile.

There are a couple of ways to get into chair. Running is one of the first and most obvious if you are starting somewhere near the console. Sure, there's a change that you'll be ejected immediatelly, but this can be avoided with a little preparation.

Firstly, you want take yourself a name that gives off dependable aura, like "BOB_THE_BUILDER!!1". That's a good name that makes people think they can count on you, a comm who has memorized all the important shortkeys and makes a regular use of them. Boring and colorless "clanname|playername" tends to cause eject. If you see this type of player in the chair, always type "EJECT COMM!!!! NOOB COMM!!!".

Secondly, if the name alone does not do the trick, you need to take your preparation a few steps ahead with a couple of friends if possible. Start off by throwing slander on the previous comm. Even if he won the game it should be clear that he wasted everyone's time with mindless errands and waypoints. Then tell your friends to be ready on the server and eject any other comms that try to get in your way and promise shotguns for everyone. Abuse your microphone too if needed. Be creative.

Now that we have the chair under control, we need to ensure it stays that way. Aside trying not to get ejected, be on a constant lookout for aliens. They have a nasty habit of eating your house and people. Should this ever start happening always yell "NOOB TEAM LOL KIL TEH ONO!!1111" or give out a few welders to fix your buildings. As for defending, it's good to place lots of mines on the walls and position a pair of turrets by each doorway.

Relocating your base is also a valid option that makes things a whole lot more interesting. An ideal place is a wide open area space with lots of ventholes everywhere. In other words, a great location to fly around with JP/GL combo and blow away who-knows-what monsters. An occupied hive area is also a safe place to relocate in. Only a noob-squad could screw up a fusion reloc. Staying in the marinestart is always a sign of noob com. Lol!!11 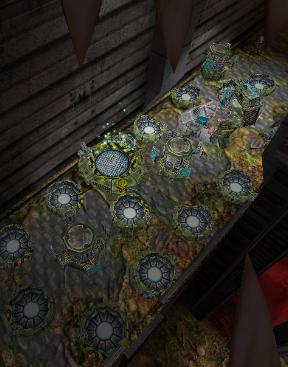 Notice sufficient amount of IPs. 11 Infantry Portals guarantee a flexible spawnrate for your troops any time in the game. Securing the base with electrified TFs is also basics. Ensure that all 3 turrets in your base are working by having a few extra TFs. Getting a Siege cannon spinning around somewhere is a good call as marines are normally boned when the aliens get a change to build OCs into your base. You should be very mindful of that.

Armory is one of the most critical aspects of your baseplan. There are several of those which makes it easy for marines to use them right after spawning. Having your pockets full of ammo is an absolute necessity during a PG and IP rush, and this is ensured with a smart armory positioning. Also, aliens won't know which one is upgraded. Upgrade all of them to stay on the safe side.

ARMS lab should not be built unless you've got nothing else to put your resources into. That's another dead nubcom giveaway. Normal pubteam does a lot better with shotguns than 3/3/MT ups.

If you can't come up with a base similar to the picture above in about 5 minutes, you might want to consider building fewer RTs. Most comms ensure their victory by investing their starting res into shotguns, mines and welders. With those, marine team will quickly earn the res back and start making profit off the aliens who are obviously pissed off.

Now that you've got the alien team in a firm grip, it's time to celebrate. Every upgrade earns you two points and every building gets you up by one. On HLStats servers it's ok to farm TFs and turrets. Forbid your troops from leaving the base with a few players excluded and say "LOL!! WAIT SHTOTY AT BSAE!!!! I GIWE SHOTTTY!!111". It's better when aliens get killed from your turrets. You'll see an immediate rise in the scoreboard. The higher you can climb, the more people will look up to you. Take a screenshot and post to forums if you like. When you are mopping the floor and ceilings with aliens, it's only natural to delay the game and humiliate them even more. You have the right to enjoy your victory.

If you ever find yourself heading toward unavoidable defeat, despite having followed the instructions in this guide to the word, only thing you can really do is type "BG!! NOOB TEAM SUXX LOLLOLLOL!!1". From this everyone understands that you are a mature commander who knows what to do. Only a terrible team could have caused you this loss. Don't worry too much about it. Finally, humbly remind everyone that "I COMM NEXT ROUND OR I KICKBANYOU!".

"...won't know which one is upgraded." thats not true, u can see it on the bottom of armory.
TF in base is a waste of res.
11 IP is lol and a waste of res.
Arms lab is important.